James Herbert Keenan was born in Ohio (US) in 1964, today better known as Maynard James Keenan, front figure and vocalist in three important contempart American bands: Tool, A Perfect Circle and Puscifer all at least in theory still active. 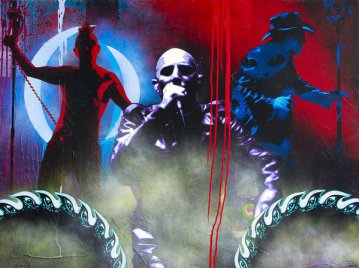 As I would consider Maynard one of my absolute favorite Rock vocalists, it is about time that I made some posts about his music, this will be the first also celebrating my 150 blog-post.

What I especialy like about Maynard music, is that even though he is clearly rooted in and famous for his Hard Rock/ Prog Metal work, he did not accept to get boxed in one genre. I won’t get into the contents of his lyrics too much not having english as my first language, but I can say that i truely enjoy the deep emotional expressions of his voice whether it is agressive, sensitive or licentious.

Maynard with David Bowie and John Frusciante on Bowie’s ”Bring Me The Disco King” used in the soundtrack album for Underworld (2013).

Maynard parrents divorced and from the age of three he only saw his father a few time a year, growing up in Ohio amongst what he referes to as dead people. The creative shift came when he moved to Michigan, living with his father during his highschole years, then three years in US army after which he studied at Kendall College of Art and Design in Michigan.

During the late 80’s Maynard started playing bass and singing in local bands in Michigan, but what was to catapult his career was the move he made in 1988, relocation to Los Angeles and meeting guitarist Adam Jones with whom he was soon to form Tool.

Besides Maynard and Adam, the band was Danny Carey (drums) and Paul D’Amour (Bass). Two years after their formation the band was releasing their first recording the EP named Opiate, after Karl Marx: “Religion is the opium of the people”

The EP is composed of 7 tracks (the last one “hidden”) the album is Hard Rock/Metal with little sign of the progressive elements that Tool would develop later.

Ataxia plays experimental rock, far from Red Hot’s funky style, this is basic, basement, raw, and very direct Rock, much more grunge and stoner rock expression, that we get from Red Hot. Not much studio either, sound just like you would expect if you was invited into a live jam session. Frusciante constantly fires his often distorted guitar, a constant bass line keeps pounding, some nice drumming to back it all up, and vocals sometimes aggressively screaming, sometimes almost just talking, sometimes twisted, sometimes clean.

This may well be seem as another Frusciante based jam session, both albums by Ataxia was recorded at the same time, and within only a few weeks. But the music was created between the three people involved, so it is fair that it was credited as a band effort, not a solo album.